Dan Gurney and the Woods Brothers could have been rightly considered the “supergroup” of stock car racing back in the day. And they both had their own successes but their 1969 Riverside 500 effort would not turn out to be one of them. Still, there’s something magical about the Mercury Cyclone Dan raced that year. […]

“There are two kinds of sports car enthusiasts: those that describe this vehicle as the Shelby Cobra, and those that identify it as the AC Cobra. From the time that I was a young boy I was always in the latter camp. Whenever the muscle car guys crow with pride, I politely remind them that whatever […]

I know there are those who don’t consider the AC Cobra a truly British sports car but, rather, a car of British heritage. Let’s not quibble over the details and agree that the Cobra was (and is still) a simply fabulous sports car. And, while I appreciate the raw power of the later 427-powered cars, […] 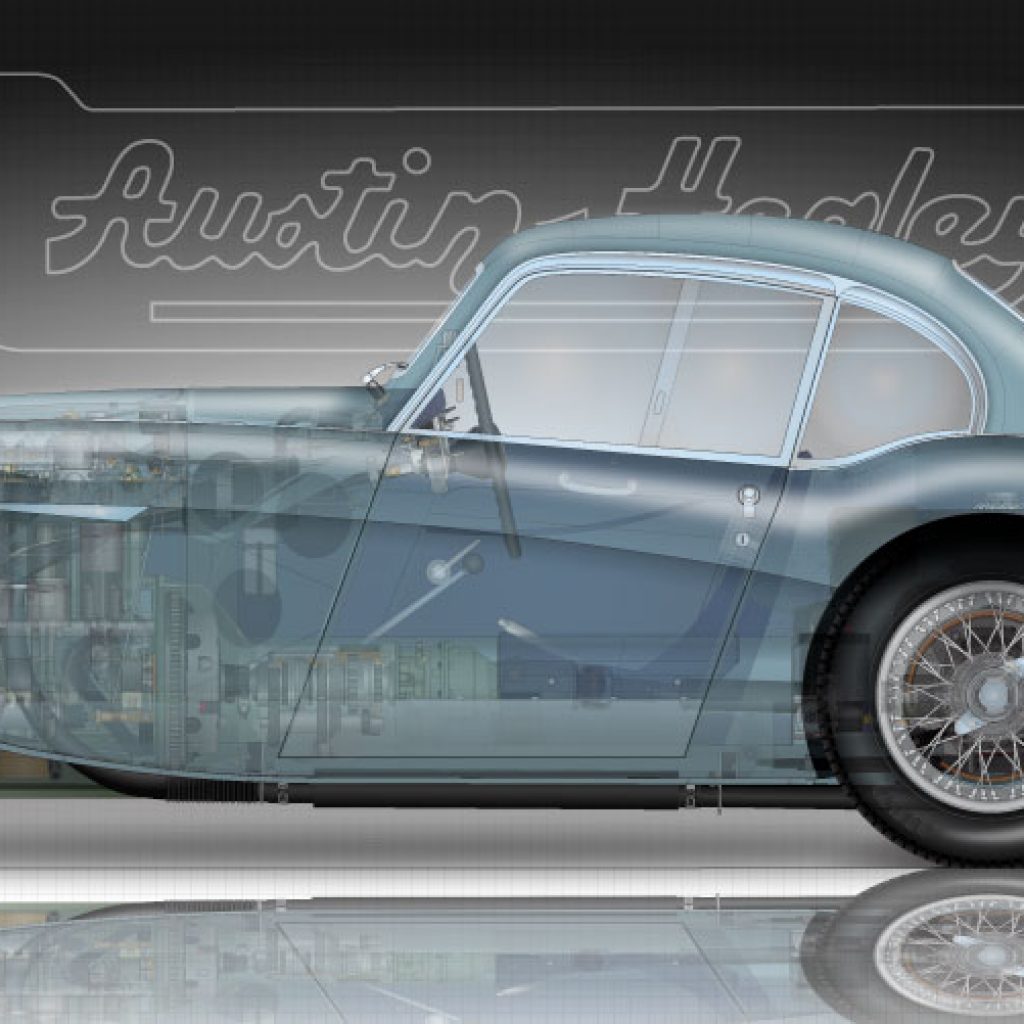 No, you’re not seeing things. That’s actually one of my illustrations—OAC1—but drawn in reverse at the request of David Matthews for a project he’s working on. Here it’s depicted as it might have been seen after just departing Jensen and well before it met with several unusual modifications as a brake and engine development car for […]

The 1955 24 Hours of Le Mans would go down in history as one of the worst tragedies in the annals of motorsports. The NOJ 393 Austin Healey, driven by Lance Macklin, swerved to avoid a Jaguar D-Type that was braking heavily for the entry to pit lane putting Macklin directly into the path of a Mercedes-Benz […]

Only three works rally cars were built in Abingdon for the 1964 racing season. The factory-built competition cars featured three-Weber carburetters (rather than the standard dual S.U.s) and competition side exhaust that helped improve the notoriously low ground clearance of the big 3000. Vented front wings were fitted to help improve brake cooling and a hardtop was […]

In 1953 Donald Healey wanted to promote his new sports car and it was decided a great way to make a splash would be to break the speed and endurance records for production cars. The team from Warwick spent a goodly amount of time developing a streamlined version of what would eventually become the 100S […]

Surely among the most beautiful cars ever built, the BMW 507 ranks was of the most expensive automotive failures of all time, nearly pushing BMW to the edge of bankruptcy during the model’s short, three-year production span. Conceived by importer Max Hoffman as a sports car to fill the gap between the more expensive Mercedes […]

“Iconic”, “groundbreaking”, “stunning”. There probably aren’t enough superlatives to describe the Corvette C2 Stingray. I was encouraged to draw the C2 by a long-time client of my British car fine art prints and, while it’s taken me nearly two years to finally get the deed done, I’m happy he pushed me to illustrate this landmark […]

The 1967 Formula One season was, in many ways, a season of firsts. Jim Clark won the Dutch Grand Prix racing the Lotus 49—a car he was driving for the first time—in its very first outing. Dan Gurney became the first (and only) American driver to win a grand prix in a car of American […]

The brainchild of Frank Nichols, Elvas were one of a number of post-war cars developed specifically for club racing. After producing a number of very successful sports racers and formula junior cars, Elva was encouraged to develop a road-going sports racer. Designed with a ladder type frame, the Courier was simple to manufacture, competitive on […]

It all starts with a car named Grace, an Austin-Healey 100 purchased in a derelict state from E-Bay, barely running and suffering from deleterious rust and limited oil pressure. When her owner was given a near death sentence from his oncologist, a few stalwart members of his local car club decided to inspire him by […] 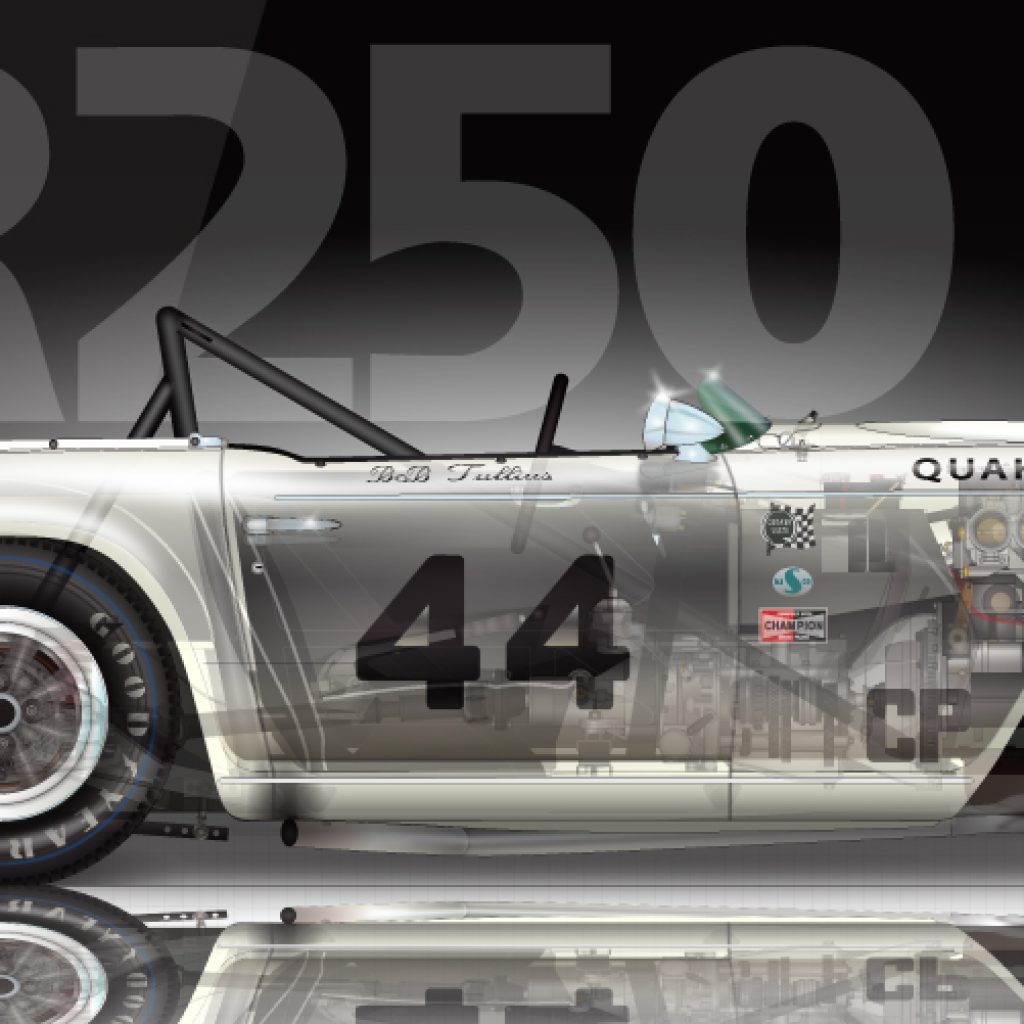 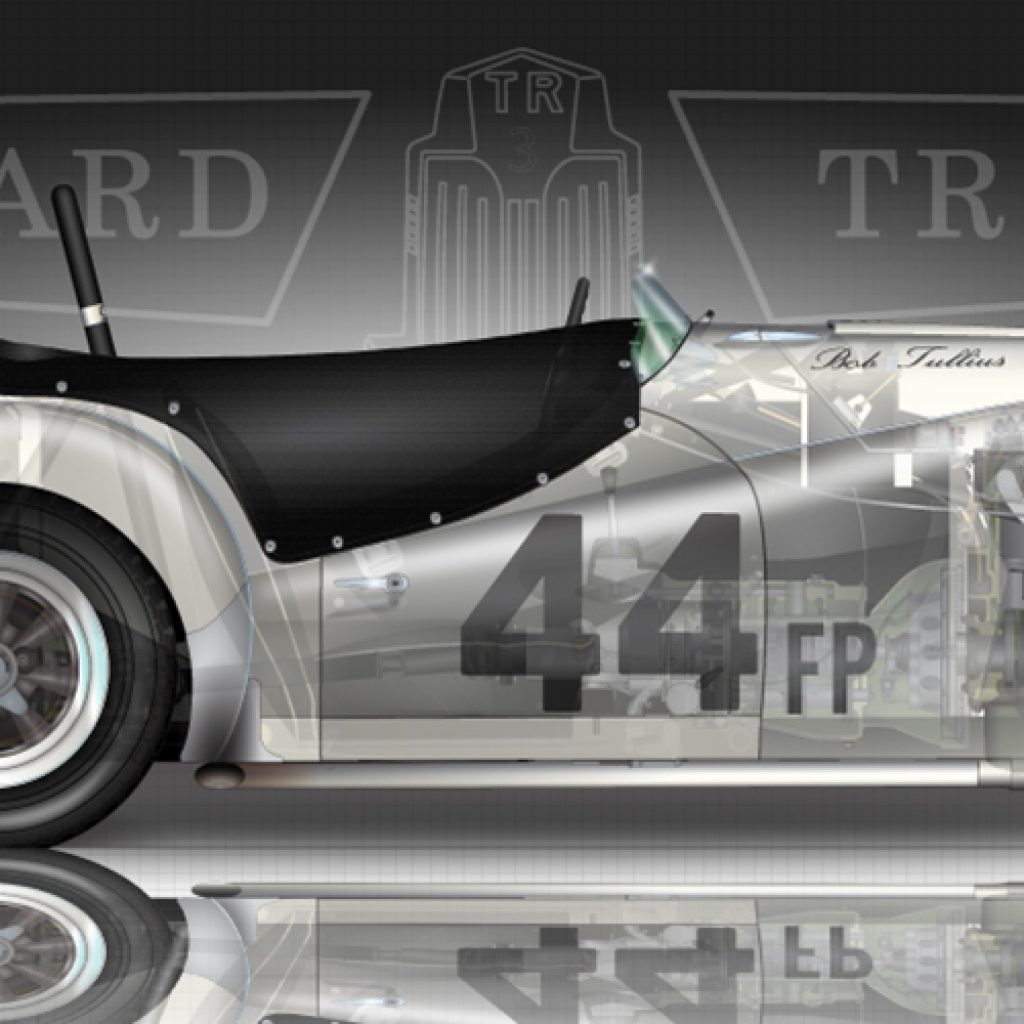 Bob Tullius and his Group 44 co-drivers really tore up SCCA racing with their meticulously prepared cars. The TR3, TR4, and Spitfire were all incredibly successful race cars but nothing stands still in competition and, though among the winningest cars in SCCA history, time came to put the TR4 out to pasture, replaced with the TR4A […] 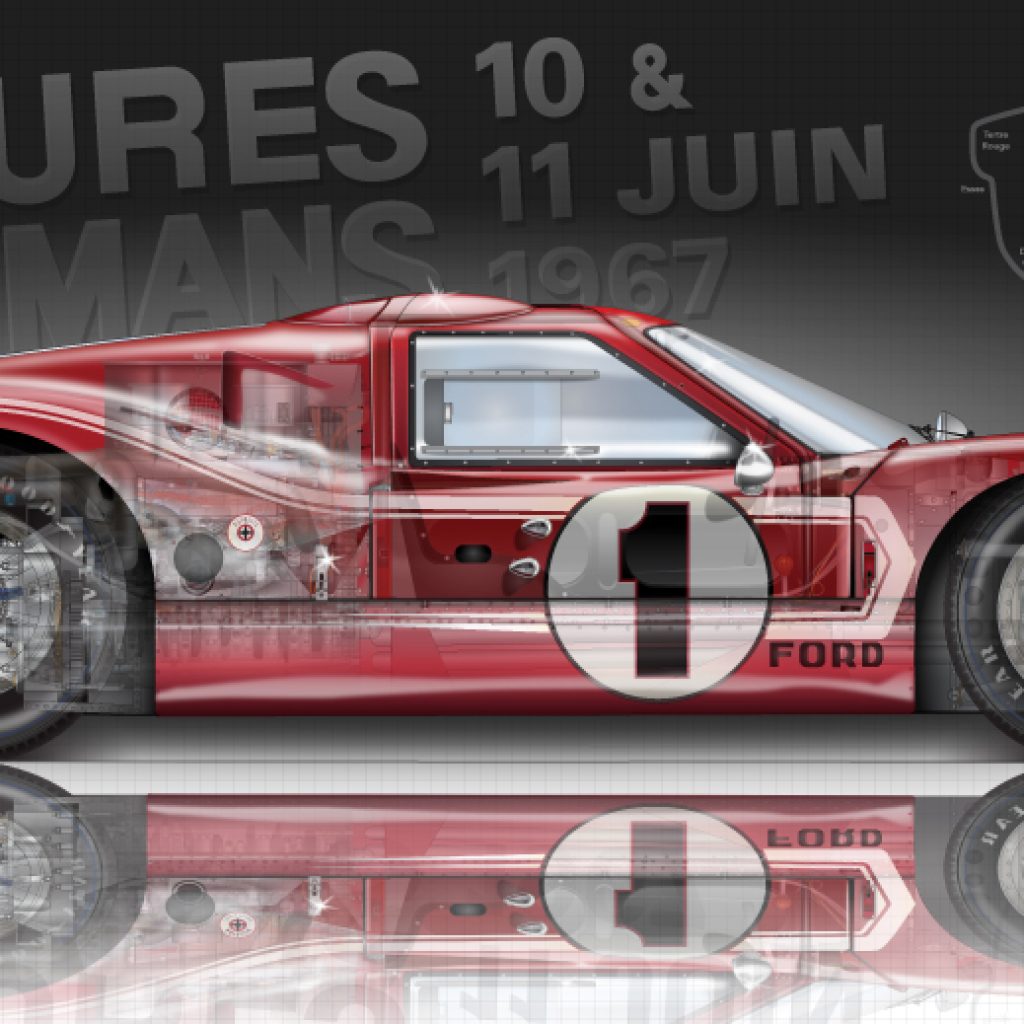 Through a very special arrangement with the Gurney family, I am pleased to be able to offer these very limited  edition, Dan Gurney signature archival prints of the Dan Gurney and A.J. Foyt 1967 Le Mans winning Ford Gt40 MK IV. With technical support from Justin Gurney and reference material provided through the Henry Ford […] 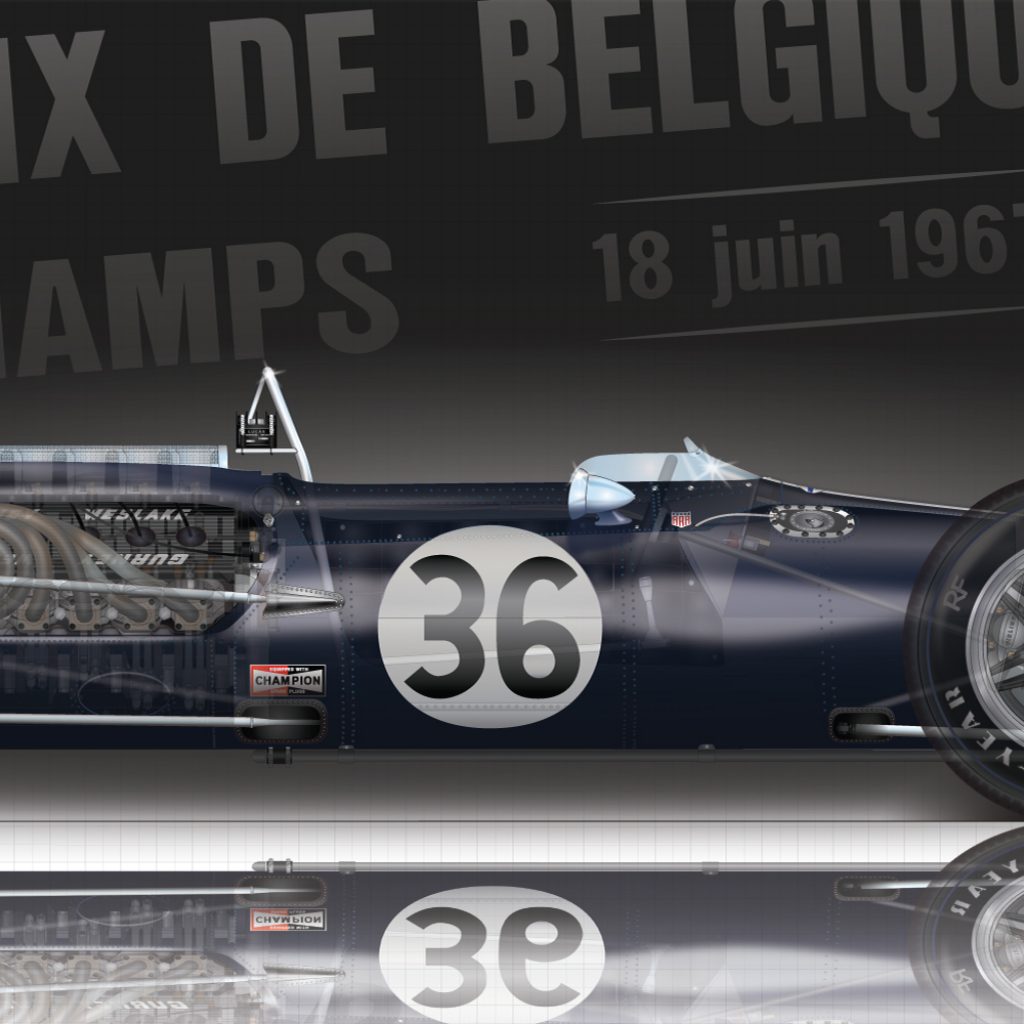 Twelve cylinders of screaming power topped by what might be the most beautiful set of exhaust headers ever made. A highly successful motor racing driver in many disciplines, Dan Gurney had been driving in Formula One since the late 1950s. While driving for the Brabham works team, he joined with a group of prominent motor racing figures and […]

Following the failed 1968 LeMans campaign, Healey returned to the legendary endurance event in 1969 with a new version of the SR. While the basic mechanical layout remained the same as the previous year’s car—other than relocating the radiator to the front and a few other minor changes—the bodywork saw significant, though subtle, changes in […]

In the late 60s Donald Healey wanted to return to LeMans and reclaim some of the glory of his early successes. To that end, he wanted to develop a car that could compete at the highest level and, in every respect, be an entirely British effort. Developed in strict secrecy, the resulting Healey Climax SR […]

Ah, what might have been. Recreated from Gerry Coker’s early drawings, the few remaining photographs, and Gerry’s assistance, this was early example by Tickford was originally drawn for the British Sports Car Companion but I’ve decided to offer it as limited edition print. Learning about the design mule was very enlightening—from the 16″ wheels to […] 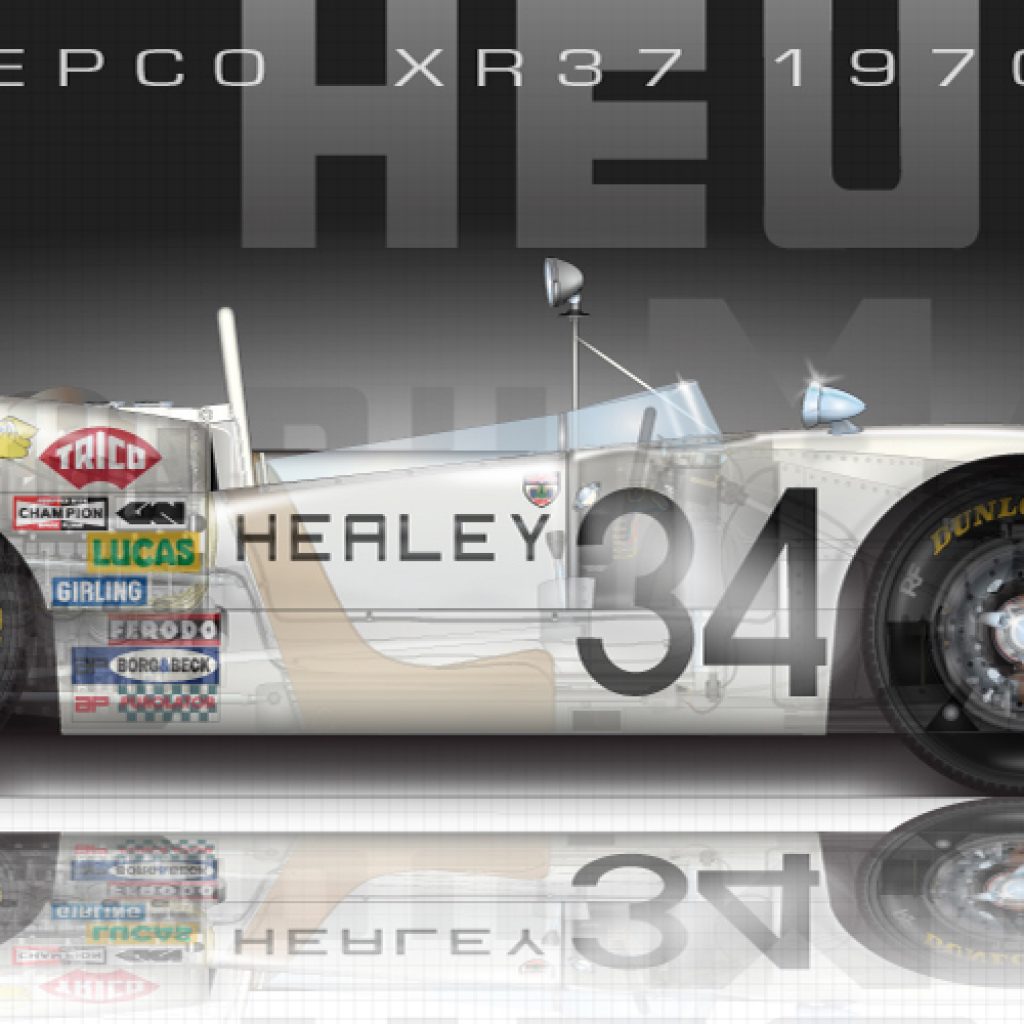 What a car! New LeMans rules? No problem! Let’s just chop the top off last year’s car, stretch the chassis by 5″ then stuff a big bad Repco V8 in it. Yeah! That’s the ticket. When faced with the new Sports Protype rules for 1970 that’s, more or less, exactly what Donald Healey did. After […] 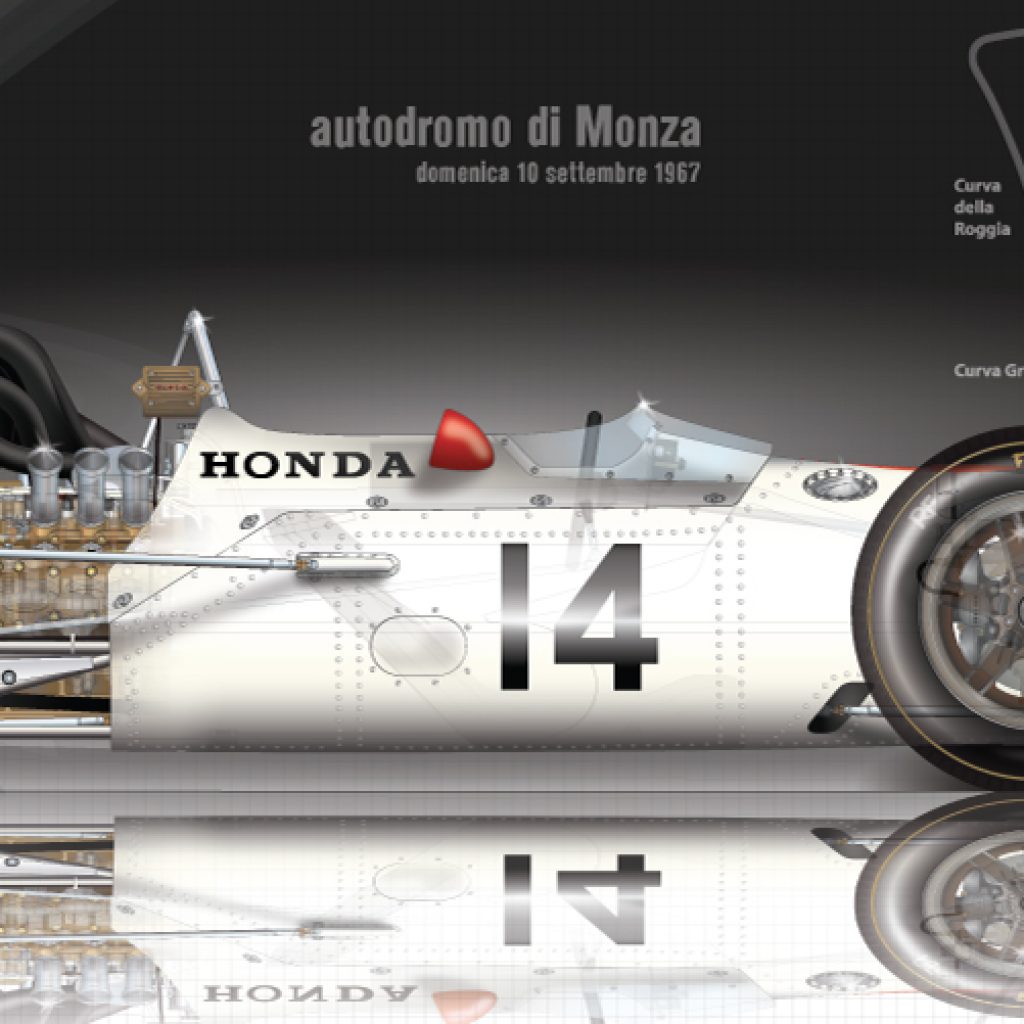 The Honda RA300 was introduced towards the end of the 1967 Formula One season. It retained the same V12 engine as the preceding RA273 car, but the chassis was designed by Lola’s Eric Broadley and based on a previous Lola Indianapolis 500 car, the T90. Internally, Lola designated the RA300 the T130. This collaboration resulted in the machine quickly being dubbed the “Hondola” by the motorsports press. Broadley’s […]

The spruce green #AHS3504 Austin-Healey 100 S was built in February of 1955 for the 12-hour Sebring race for movie star, Jackie Cooper. Cooper had raced a standard 100 with some success on the east coast in SCCA races and was a close friend of Donald Healey. In a memo Cooper writes,” In Sebring faulty wiring […]

The Jaguar C-type was the beginning of the marque’s dominance of the 24 Heurs du LeMans in the 50s, taking home first place in both 1951 and 1953. It’s hard to get more legendary than the C-Type with the equally legendary Sir Sterling Moss up on the wheels, powering down the Mulsanne Straight. Shown […]

I the C-Type announced Jaguar’s intent to dominate 50s motorsport, the the D-Type cemented the legacy with multiple wins at the 24 Heurs du LeMans as well as numerous other events around the world. Indeed, the D-Types continued to win in the hands of privateer owners into the early 60s, long after Jaguar had pulled the […]

I’ve always admired the Jaguar Lightweights—both the roadster and coupe versions—but have a particular fascination with Briggs Cunningham’s efforts at the 1963 24-Hours of Le Mans. There’s just something fundamentally beastly about those three cars. While they didn’t meet with much success on the track they helped Jaguar develop their E-type into one of the […]

The 1967 Formula One season was, in many ways, a season of firsts. Jim Clark won the Dutch Grand Prix racing the Lotus 49—a car he was driving for the first time—in its very first outing. Dan Gurney became the first (and, so far,  only) American driver to win a grand prix in a car […]

Designed by Ron Tauranac, the BT24 was based on the BT23 Formula 2 car and was notably light and compact. Tauranac continued to adhere to the space frame chassis, at a time when most of the F1 constructors had moved to monocoque chassises. The BT24 was designed to take the new Repco 740 V-8 engine and Tauranac had requested […]

The #192 Sunbeam Tiger that ran the 1965 Targa Florio may be one of most famous Sunbeam Tiger on the planet. Immortalized in the Castrol film Mountain Legends, the Rootes competition prepared Tiger finished a respectable 14th in the grueling Sicilian race. Starting with a stock 1964 Alpine, the legendary Carroll Shelby was brought in […] 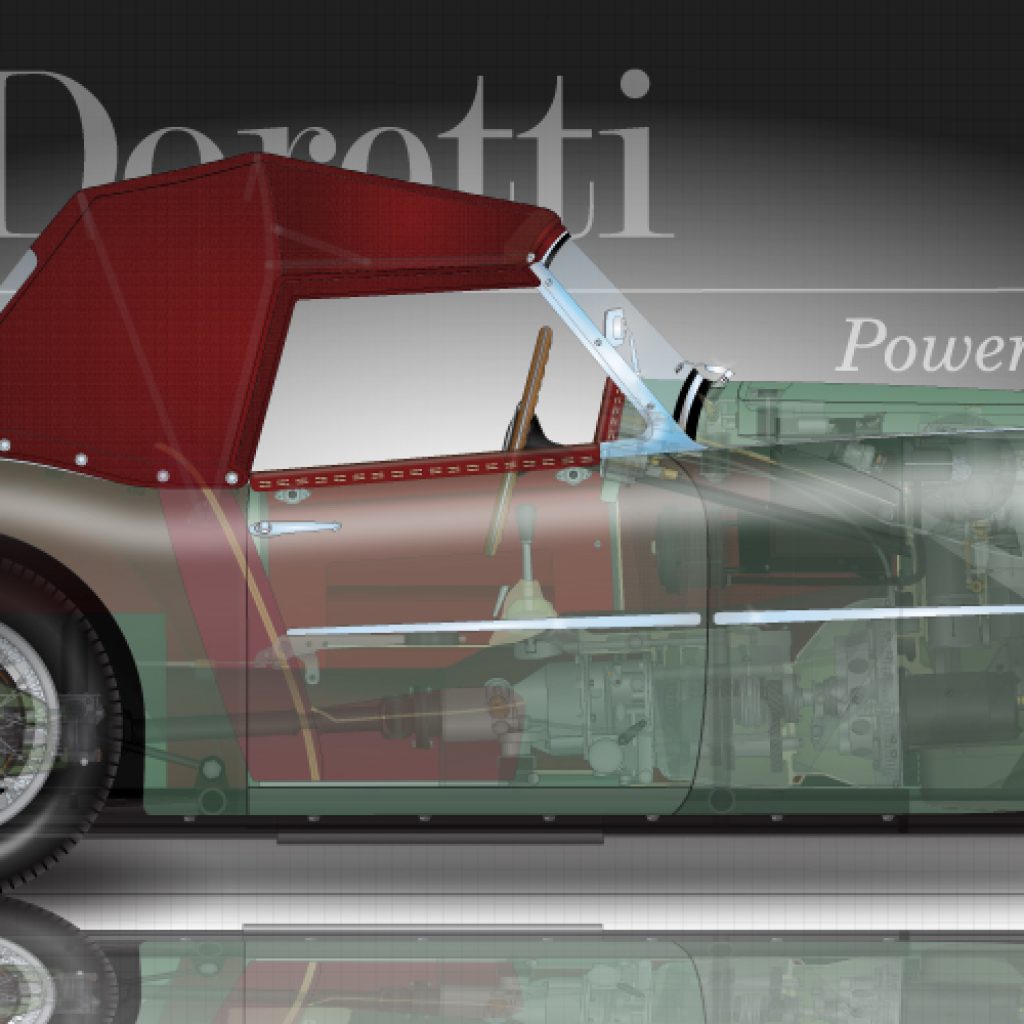 To compensate for declining sidecar sales, the Swallow Coachbuilding Company launched its own sports car the Doretti in 1954. The design was the concept of a coach-builder named Eric Sanders and Californian Tubing Company boss Arthur Andersen. Following a visit by Eric Sanders to California in July of 1952 both men felt that there was […]

Another in what may eventually become a series on the concepts from which popular British sports cars of the 50s, 60s, and 70s sprang, the 20TS, unlike many show cars, was a fully operable sample when it hit the 1952 Earls Court auto show to generally mixed reviews. While the front end was well received, […]